Back In Motion announces its most inspiring director 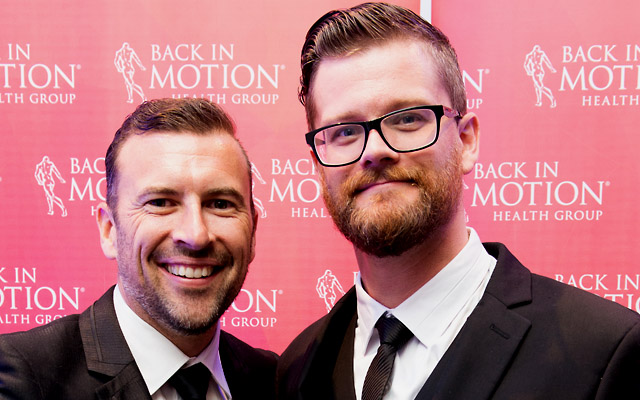 Jeremy, pictured above, right, received the award at the Group’s annual directors’ conference, held in the Barossa Valley from 2-4 March. The award recognises exemplary performance, passion for the Group’s vision, outstanding achievement and peer respect.

Jeremy has been a physiotherapist since 1998 and the director and principal of Back In Motion Mount Barker for more than eight years, joining the Group in November 2007.

Since then, Back In Motion Mount Barker has grown significantly and in 2015 was awarded Practice of the Year within the Back In Motion Health Group. in November 2014 Jeremy also became a Director of Back In Motion's Blackwood practice.

Jeremy has also enjoyed a role in Clinical Education for local University placements and has seen many students move through and join the Back In Motion Health Group at various locations.

Jeremy said he was truly humbled and honoured to win the award.

“There is an abundance of exceptional people within our Group, many of whom have inspired, supported and coached me on this journey. Things haven't always been easy, but I have always tried to listen to feedback, both good and bad, and implement it in the Practice,” Jeremy said.

“I really want to thank Jason and the team at the National Support Office who have provided a clear pathway. I would also like to thank my most significant mentor and friend James Schomburgk who still inspires and challenges me, my business partner on the ground in Mount Barker, Greg Goh who has provided massive support as our growth accelerated in recent years, and my wonderful wife Kelli who has pulled me up when things got tough, and keeps me grounded when things go well.”

Founder and Group Director of Back In Motion Health Group Jason Smith said Jeremy provided exceptional support not only to his fellow directors at Back In Motion Mouth Barker but the Group’s directorship and support office.

“Jeremy is a Director that has the true DNA of the Back In Motion Health Group running through him as well as the corridors of their business. He put trust and faith in the model and stays perfectly aligned to the mission and values of the Group,” Jason said.

“He also leads with clear vision and this is evident by the stability within his team.

Back In Motion Health Group’s Most Inspiring Director award is presented each year at the annual directors’ conference. For the first time the 2015 award included voting from the Group’s directorship which spans six states and 100 locations across Australia.